India is well-placed to become a $5 trillion economy by 2025. Perhaps, we all know this, right? But what if I tell you, that the young Indians would primarily drive this growth. Surprised?

Before I come to how, let me tell you quick facts. 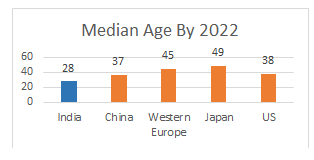 What does all this mean to Indian economy?

In one of my discussion with Manish Goel, he pointed out, “The key driver for any economy that fosters its growth, sustainability and competitive is demographic dividend. India is still yet to unleash the miracle of this demographic advantage that India has over other economies. Today, there are more than 650 million mobile phone users in India, which makes it a bigger smartphone market when compared to U.S. and second to China. The biggest assets for the country would be human capital and data, and India has both of them.”  Read more on what makes me so bullish on India here.

Here are three ways the youth demographics will be key driver of growth in future:

Having said this, India also needs to understand that if it wants to leverage on this demographic opportunity, it will have to increase the efficiency of the economy, work towards the digital future as well as focus on improving the quality of education and healthcare facilities in India. Then only, we can genuinely unleash on this magic of human capital to reach the destination of $5 trillion economy. Click here to know more about investment opportunities which will outperform over the next 4-5 years.

Get in touch with us!

Get Free Fundamental Research Reports Worth ₹10,000 (The above two fundamental stocks are to demonstrate the depth of research conducted at R&R. This should not be considered as Free Trial of our services.)

India A $5 Trillion Economy By 2025 Are You Ready For Investing!