Going Back to The Golden Era

Just like an author cannot write without inspiration, an artist cannot compose music without mood; a value investor should never look into the future without studying the past.

No, this is not some social media forward, but a conversation with an investor Mr. Mehta on Sunday evening got me into thinking.

"Harsh, all your stories talk about this being the right time to invest. But you cannot ignore markets are still volatile."

"And what makes you think this is not the time to invest?"

"Do you know where we are currently?"

Looking confused, he replied, "Means what?"

"We are exactly where markets were during 2003."

"Not just GDP, but every parameter that you mentioned., GDP, corporate earnings, auto sales, interest rates and a lot more."

Now I got his attention. So supporting my argument, I pulled out a few graphs.

“See, do you understand what I mean?” I asked him.

“From the times of good growth in 1997, and a decent growth in 2000, the economy went through a bad patch for a couple of years, but only to spike up again. Mr. Mehta, I will never say dull phases will never come, but since the fundamentals of an economy were intact, after every dip, the economy has bounced back with a bigger jump on most of the occasions. Right?

“So what? There have been phases of slowdown many a times. Over the past 25 odd years, the Indian economy has seen a growth rate of less than 6% for 6 of these 25 years. In fact, it has touched 4% mark on 3 out of those 6 occasions,” he argued. 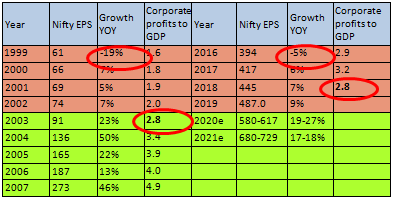 “Wait Harsh, maybe you’re jumping to conclusions way too soon,” he snapped back. “What about the consumption? It is decreasing quarter on quarter, clearly not a case before.”

So what I did is show him to charts. One, data of car production in India from 2017 – a downward line! I then showed him another chart that showcases the trend line over the past 20 odd years.

I then continued, “The above chart shouts out that India is going through an extremely rough phase, but the below chart shows a longer trend and shows a completely different picture.

“Don’t be so excited. I know you must be thinking that we are all set to enter the golden phase of 2003-08. And, history says most likely. The government back during 1999-2003 took a lot of initiatives for infrastructural growth. And, we can see the same with the current government as well. Along with this, all the reforms shall pave the way for growth in the next few years.”

“So, you genuinely think Indian stock market shall again grow by 6 times as it did during 2003-08?”

“Now you’re forcing me to predict the stock market movement, which I never do. Never deviate from the fundamentals, is your answer Mr. Mehta,” I smiled.

“Tell me more about it.”

Get in touch with us!

Get Free Fundamental Stock Market Research Reports Worth Rs. 10,000 The recommended two fundamental stocks are to demonstrate the depth of research conducted at Research & Ranking. This should not be considered as free trial of our services.

Investing In The Post Covid-19 World. What's Next For Investors? This video will arm you with the latest market updates, way ahead and
best practices for wealth creation during the pandemic.